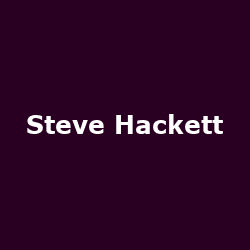 Discovering that Steve Hackett turned 60 last year perhaps won't raise too many eyebrows. But when you consider that the accomplished guitarist was a member of the titanic global-rock outfit Genesis as far back as 1971, you might just be a tad impressed - he was 20 years old, the same age as the other key members, Gabriel, Banks, Rutherford and Collins.

Hackett remained in Genesis until Phil Collins moved into the driving seat, recently vacated by Peter Gabriel, before cementing his place in solo rock-star history. Since then, he's issued over 20 albums of technically sharp and progressively-arranged music, including the landmark 1975 debut, "Voyage of the Acolyte", plus highly-regarded sets such as "Spectral Mornings", "Defector" and his most-recent collection, "Out Of The Tunnel's Mouth" - his most-recent until now, that is.

September will herald the release of album number 23, entitled "Beyond The Shrouded Horizon", which Hackett himself describes thus: "My new album Beyond the Shrouded Horizon breaks free from its moorings in early autumn and sets sail through choppy riffs and sudden electric storms to the odd romantic isle...". Almost business as usual, then? Well, not quite - the genre-hopping axe-man will visit pop, rock, baroque and blues while presenting it in a lavish deluxe package that gathers CD, vinyl and t-shirts in a smart box-set arrangement via his webstore.

No new album would be complete without an accompanying tour and 2012 will see Steve Hackett perform various shows across the UK, including Farnham, Aberdeen, Edinburgh, Holmfirth and more until Milton Keynes on 26th February. He is also touring during November this year, including Tavistock, Gloucester, Manchester and London. We have tickets for these Electric Band shows, priced between £17.50 and £23. The new album should ensure a few sold-out dates for the popular musician.