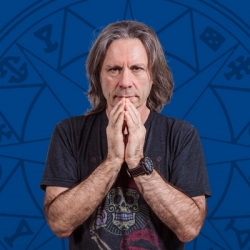 It is hard to think of prog-rock without conjuring up images of Spinal Tap and their miniature Stonehenge stage prop. The reality is that although Tap was a parody, its credibility was founded in the fact that during the late sixties and seventies, there were a crop of progressive rock bands who experimented with English folklore themes, such as druidism and Stonehenge, and it was rather popular.

It still is. Acts like The Moody Blues, Van der Graaf Generator, Yes, Emerson Lake & Palmer and Jethro Tull may have become bywords for 'these-go-to-eleven' folk rock sensibilities but the reality is that they are (and remain) some of the biggest bands in British rock history.

At the forefront were Jethro Tull, a case in point. Formed in 1967, the British prog rockers have released more than 20 LPs accruing global sales in excess of 6o million albums. Singer, songwriter, guitarist and legendary prog rock flautist Ian Anderson has been the driving force behind Jethro Tull for getting on half a century and he is showing no signs of slowing down,.

This year marks the 40th anniversary of the release of their album 'Aqualung', with a special edition now available, featuring a 180g LP, 2 CDs, DVD and Blu-Ray disks as well as a booklet (the box-set will set you back a cool £95 on Amazon). Anderson, meanwhile, continues to perform live, with an extensive September tour starting tomorrow in Shrewsbury.

His 2012 'Thick as a Brick' tour kicks off at Perth Concert Hall on 14th April, followed by gigs in Glasgow, Newcastle, Liverpool, Sheffield, Manchester, London (Hammersmith Apollo), Cardiff and more, before the final show of the run at the Southampton Guild Hall on Sunday 6th May 2012.

We will have tickets for all dates when they go on sale at 9AM on Wednesday 7th September, with prices starting at around £25.