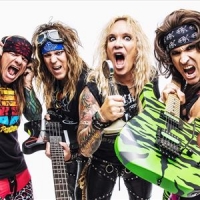 Flying the flag for British heavy metal and straight-edged rock since the late '70s, usually means that, as a band, you've probably seen and been through it all at some point.

Def Leppard were one of the first bands to decorate MTV's relentless diet of groin-thrusting rock-bands in the early '80s, with the horn-raising "Bringin' on the Heartbreak". They cracked the UK and US album market with the shamelessly-commercial "Hysteria" album in 1987 and continued that success five years later with "Adrenalize". They've repeated this pattern ever since, minus the Top 20 hit singles.

All of which is rather incredible when you consider that Rick Allen, their drummer, lost his left arm during a car crash, exacerbated by a bout of reckless road racing on Sheffield's streets. Despite what Clarkson tells you on Top Gear, kiddies, it ain't a good idea to rake the testes out of your sports-car on Britain's roads, whilst trying to plough into a nearby field.

Almost 30 years on from recovering from that serious prang, Allen and other founder members Joe Elliot and Rick Savage, with Phil Collen and Vivian Campbell have continued to sell out big arenas, which is good news. Def Leppard are playing six of them in December, with two fetching support acts in tow.

Doyens of mucky sleaze-rock and all those "Girls, Girls, Girls", are Mötley Crüe who promise (and I quote from Nicki Sixx here), "...a de-virginizing of each others' fans...with one f**king wild party together". No ballads here, then. The warm-up band on the tour will be Steel Panther - you know just what to expect with them!

The half-dozen December shows take in Birmingham, Nottingham, Glasgow, Manchester, Sheffield and finally Wembley Arena on the 14th. Tickets go on this morning (Friday 2nd Sep), costing £47.50 for the Wembley date, £45 for all others.