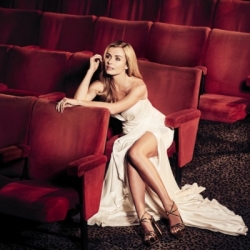 The publicity spiel will tell you that Katherine Jenkins is a multi-platinum selling mezzo-soprano from Wales. She is all of those things and is deservedly lauded for her breathtaking vocal talents - but the 31-year-old from Neath has become much more.

For Katherine Jenkins has something that seemingly eludes so many, not least the embattled Cheryl Cole. You could call it the X Factor. Being a beautiful young woman helps but that's not the key to Jenkins' success - the classical genre has long been welcoming pretty young things into its CD racks in HMV.

No, Jenkins has that something extra. It may be no more than her manner, her polite humility. Perhaps it is her unabashed South Wales accent, proudly worn. Maybe it is the likeable, slightly mischievous glint in her eye. Most likely it is all of these things, wrapped in a pretty package and crowned with a mezzo-soprano voice that thrills ITV armchair fans and classical purists alike.

All of which makes her very popular. Tours sell out quickly, almost instantly. Every new release and set of dates creates a rush and crash of servers and later this week we can prepare for more of the same. With a new album, 'Daydream', due for release in October 2011, Jenkins is taking her new record and her beguiling self on the road in early 2012.

The tour kicks off at the New Theatre in Oxford on Saturday 7th January 2012, before taking in a number of large and prestigious venues including two nights at Ipswich's Regent Theatre, the Playhouse in Edinburgh, the Cardiff Motorpoint Arena, Birmingham's Symphony Hall and a couple of performances at the Bridgewater Hall in Manchester.

Blackpool, Brighton and Nottingham, among others, also see a visit from the Welsh songstress before the final gig of the tour at the Hammersmith Apollo on 16th February 2012.

Ahead of the Daydream tour, Jenkins has a couple of big BBC dates in the calendar. On 10th September, she's appearing at the BBC Proms in the Park 2011 in Hyde Park and then on 25th September, Katherine will be giving her vocal chords an airing at the BBC Songs of Praise 50th Birthday Party at Alexandra Palace, alongside Andrea Bocelli and Aled Jones.

We have tickets available now for both BBC dates, priced £32.50 for the Proms and just £12 for Songs of Praise.