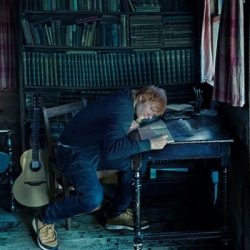 The rise and rise of Ed Sheeran may well turn out to be the title of his future documentary, presuming he continues having the same sort of success in ten years time. Judging by the loyalty and devotion shown by budding fans and songwriters across the UK, the young singer, musician, songwriter and best-mate with half of the British grime artists, will be knocking out new songs for a good few years yet.

Times have certainly changed for the better for Sheeran since engineering for the Midlands outfit, Nizlopi, after they grabbed a cheeky #1 single with "JCB" in 2006. But his own recording career actually started as far back as 2005, when he issued the first of a handful of EPs, entitled "The Orange Room".

In fact, it was another EP that drew attention to Sheeran - the "No.5 Collaborations Project" EP in January. He enlisted the vocal gymnastics of grime-stars Wiley, Sway, Ghetts and Devlin and garnered a #1 slot on the iTunes Chart in the process. Atlantic Records then dangled a contract and cash in his direction and, lo and behold, another hit popped-up in the shape of the insanely-catchy "The A Team". Now it's time for a full-on assault with a new single ("You Need Me, I Don't Need You" which you can check out on the player above), a debut album "+" set for release on 12th September and a sold-out tour in 2011.

In direct response to selling out his tour this year, Ed Sheeran has started to filter through details of a 2012 tour, starting with Edinburgh on 10th January and followed by Manchester (13th), Wolverhampton (17th) and Brixton (20th). We will have tickets from 9am on Thursday 25th August and we fully advise you to be poised and ready to snatch these bad boys - he'll probably sell these out too. Keep 'em peeled for additional shows.

As a special treat, you can grab a free download EP from his website www.edsheeran.com - Called "Take One", it features a cover of "Wayfaring Stranger", not to be found on the album.

As expected, demand for Ed Sheeran's January 2012 dates was massive, with Manchester selling-out pretty quickly. But fear not Manchestrians! Another date has been added for 14th Jan, making back-to-back Academy gigs.

A second date has also now been added for Brixton (21st Jan) after the first date has sold out and Edinburgh (11th Jan). Tickets for all new dates are on sale now, priced £15 (£18.50 for Brixton).