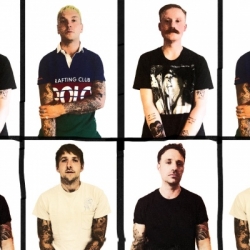 Three years after splitting, the Ordinary Boys - led by Celebrity Big Brother star and repentant love rat Samuel Preston - are BACK, after a fashion.

The boys' second album, 'Brassbound', was released in 2005, as was stand-out single 'Boys Will Be Boys'. It might have been a slice of classic 2-tone ska-pop but the album was initially met by indifference by the music buying public, failing to break the top 30 on release. 'Boys Will Be Boys' fared better, peaking at No 16.

Then came Preston's appearance in the Big Brother house and his Technicolor flirtation with the dumbly beguiling 'non-celeb' Chantelle Houghton. Preston was cast as a love rat, corrupting the ingénue Chantelle at the expense of his (presumably horrified) girlfriend, Camille.

After eviction, he proposed to Camille and they were engaged. For a month. Then he proposed to Chantelle. The next year-and-a-half generated thousands of pages of tabloid dross but can be neatly summed up with: engaged, married ('Hello!'), divorce.

And Preston was still only 25. It wasn't meant to be this way. A devotee of The Smiths, Preston styled himself on his musical idol, Morrissey. The reality show was simply meant to boost the band's profile. And it did ('Boys Will Be Boys' hit No 3 on re-release) but it also did for The Ordinary Boys. After three albums, in 2008 they jacked it in.

Samuel Preston, as he now prefers to be known, was circumspect about his time in the spotlight and apologetic towards those he may have caused hurt. A brief solo career followed before a degree of reinvention as a DJ, although DJ sets are rarely more than a glorified PA for a pop star.

Roll on 2011 and, still not 30, Samuel Preston is taking The Ordinary Boys on a swansong tour. It's not the full original line-up but still promises to be a faithful retelling and revisit of those earlier days of promise.

The 'Maybe Someday' Tour kicks off at The Cockpit in Leeds on 1st December, followed by shows in Manchester, Aberdeen, Glasgow, Birmingham, Falmouth, London (Islington Academy) and more, before the final gig at Chinnery's in Southend on 15th December.

We have tickets available now for all dates, priced £13.50 for London and £12 for all other venues.