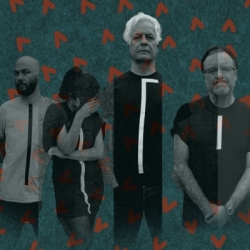 Since the mid-eighties, being a fan of The Wedding Present has been a reliably proud badge of indie cool. Loved (and much vaunted) by the late John Peel, David Gedge's indie trailblazers have, apart from a barren few years either side of the millennium, been keeping the faith ever since.

Even then, during the hiatus, Gedge was busy with side project Cinerama who ultimately morphed into a new incarnation of The Wedding Present, releasing a new LP 'Take Fountain' in 2005 and then 'El Rey' in 2008.

Throughout - from landmark single and indie classic 'Kennedy' around 20 years ago, to 2004's 'Interstate 5' - the 'Weddoes' have matured with their international fan base whilst doing just enough to remain relevant and provide new generations with record shop pay dirt.

Tracks like 'Kennedy' or 'Dalliance' still sound fresh and near perfect today and, as a result, the appetite for The Wedding Present is resolutely undiminished. It seems you can't have too much apple pie after all.

The Wedding Present's UK December dates kick off in Fife on 28th, followed by gigs in Glasgow and Leeds before the final date at Dingwalls in London on New Year's Eve.

We have tickets for all four gigs available now, priced £20 for London, around £14 for Glasgow and Leeds and just £7 for the Fife show.

Ahead of the December shows, they play Lock 42 in Leicester TONIGHT (check with venue for tickets - £15), in Clitheroe tomorrow night, followed by Middlesbrough on 13th August (both £17.50).