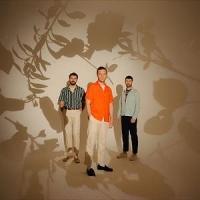 Aaron Jerome is a decent enough name, but clearly not anonymous enough for the Lewisham-born funky-house producer and musician. Hence the ceremonial tribal masks and SBTRKT pseudonym, although one could argue that his anonymity might last about as long as a Tottenham looter at this rate - word has it that this man has his future sewn up. And rightly so.

Like many club and dance artists, he started life as a DJ, but quickly moved on to working with the music, rather than just playing it out in clubs. After a debut EP, "Step in Shadows", in 2010 and several remix commissions for the likes of Mark Ronson, Basement Jaxx and MIA, he finally issued his full-length self-titled debut album in 2011. Packed full of twitchy, funky, wonky glitch bass-heavy boom-tunes, "SBTRKT" has proven to be a bit of a belter, mixing all the current club-sounds with an undertow of soul and atmosphere.

And he isn't just revered by critics and clubbers either. Friendly Fires obviously like his kitchen sink electro dramas - they've included him on their upcoming UK tour during November. All dates for that jaunt are available at Â£16, except Bristol, Southampton, Leeds and Brixton which have all sold out of face-value tickets.

However, if you'd rather catch the man at a smaller more intimate club atmosphere, you can catch SBTRKT as a headliner at one of four October shows, starting with London's XOYO on 4th October (Â£10.50), Brighton on the 5th, Bristol on the 6th and finally Leeds on the 7th, the latter three all clocking in at Â£9.50. We have tickets for Brighton now, with the other three available from tomorrow at 9am!