Posted: 4th April 2012
After last year's world premiere in Manchester, Ghost has successfully transferred to the West End and is now taking bookings into next year 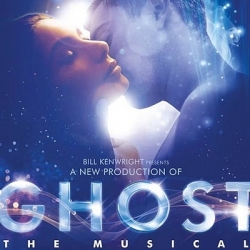 In 1990, UK cinemas were full of women wishing their men could be just a little more like Patrick Swayze and men wondering if their other halves would suit a Demi Moore crop. Everybody cried.

Lads everywhere had something in their eye and girls sobbed until their heads hurt. The reason was Ghost, the story of Sam Wheat (Swayze) and Molly Jensen (Moore), the soppy, slightly-mulleted love story of the year about a young couple torn apart by Sam's murder during a street robbery.

Add into that Sam's state of limbo while he watches over a solemn Molly, a former colleague scheming to win Molly's affections, a slapstick psychic played by Whoopi Goldberg and a (then) on-the-money soundtrack featuring The Righteous Brothers' Unchained Melody and it was a massive hit.

A kind of good-versus-evil ghostly rom-com. There was even a happy ending (although Sam was still dead, so no that happy). Made for around $20m, it took more than half a billion dollars worldwide and cemented its stars' status at Hollywood's top table.

Slightly curiously, the musical adaptation of Ghost has been an Anglo-American affair, led by British musician, producer and former Eurythmic Dave Stewart with Americans Bruce Rubin and Glen Ballard. And, featuring an original score alongside The Righteous Brothers classic, it premiered not in LA or Chicago or on Broadway, nor the West End, but in Manchester.

Running at the city's Opera House from late March 2011, the show was an instant critical and commercial success, transferring to London's Piccadilly Theatre in June after the Manchester run ended in May.

The London run has been extended well into next year and we have tickets available now, booking until 13th April 2013.

We have seats for all performances, priced from just £15 for standing stalls and standing rear circle tickets, rising to £119 for the very best stalls and Royal Circle seats.