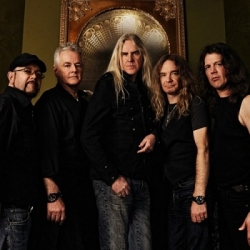 If you think today's trend of metal is the be-all and end-all and something unique, you might be a tad surprised to learn that the British post-punk years spawned many bands that are still going 30 years later. Iron Maiden, Motorhead, Diamond Head and Judas Priest (up until this year) all still exist and all still attract thousands of fans (millions in the case of Maiden) - and all recorded their first material over three decades ago.

Also very much a part of that golden era of straight-edged classic metal, denim-jeans plastered with sew-on patches and studded leather-jackets were Burnley's Saxon, fronted by the inimitable Biff Byford and armed with a shed-load of cracking tunes. "Wheels Of Steel" and "747 (Strangers in the Night)" were early singles that paved the way for a straight-run of seven Top 40 albums and a devoted fan-base.

To prove that loyalty, many of them have bought Saxon's 19th studio album, "Call to Arms", released in June this year and many more will be clamouring for tickets for their upcoming UK tour in December. Dates include Oxford on the 13th, followed by Leicester, Edinburgh, Sheffield and London. More shows may be added - meanwhile tickets will go on sale Wednesday 10th August and will cost £18.50 (or £20 for the capital). Support comes from Swedish metallers HammerFall.