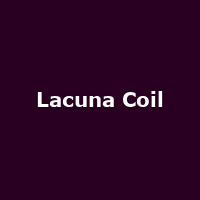 Italy's financial situation may be in a questionable state at the moment, but at least its exports continue to flourish. We're not talking pasta, pecorino or Paulo di Canio here - we're talking Lacuna Coil. Since 1994, the gothic alt-metal/rock outfit have shifted over 2 million units which is an enviable achievement for a band who didn't even issue their first album until 1998, after their second tour in fact.

Awards and MTV appearances became an inevitable reality mid-way through the last decade, before performing on the main stage at Ozzfest and Download during 2006. After a slight shift in style with 2009's "Shallow Life" set, are things about to change again with an album entitled, "Dark Adrenaline"? If they are, you'll have to wait until 2012 - it's been rescheduled by label, Century Media, to ensure the band finish off what they hope "will be thoroughly worth the wait".

Better news is the announcement of a sizeable UK tour to follow-up their European summer festival slots (including one at Sonisphere Madrid), starting in Nottingham on 2nd November, followed by Stoke, Sheffield and many more typical cities and not-so-typical towns (Dundee, Exeter, Folkestone, Colchester) until the closing pairing of London (22nd) and Oxford (23rd). Tickets are on sale now at various prices from Â£15 upwards (London is Â£17.50) - bear in mind that their tour in 2010 pretty-much sold out, so be quick!