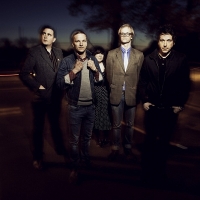 The explosive, wall-crumbling onslaught of Art Brut some 6 years back was met with some critical hysteria, not least by NME, bless 'em. Which immediately drew suspicion from me, for starters - never trust a critic, dreadful people and all that (that'll be me, then).

But, the Berliner/Londoner thrash-garage racket from Art Brut world is rather good and has borne forth some decent albums, namely "Bang Bang Rock & Roll" in 2005 and "It's a Bit Complicated" a couple of years later. So much for being named after the Outsider Art movement in the '70s - this lot were suddenly part of the NME chic, normally reserved for the likes of Franz Ferdinand and The Rakes.

Earlier in the spring, Art Brut performed a quintet of shows at the Lexington in Islington, many of which sold out, plus next month the band will be appearing at Newquay's Relentless Boardmasters 2011, providing a rather earthier alternative to Fatboy Slim and Willy Mason, methinks - if you are going, check them out.

Meanwhile, there's a new album "Brilliant! Tragic!" and an even newer single, "Clever Clever Jazz", due out in August - all of which leads nicely into their big UK tour coming up in the autumn. First stop is Liverpool on 5th October, followed by Sheffield, Manchester and more until the final (at the moment) pit-stop in Cardiff on the 19th. Tickets range from £9 to £10, except Coventry on the 8th - a club-night show which is a staggering £5!! Get in!

To whet your appetite, check out the official video for that aforementioned new single, due for issue next Monday!