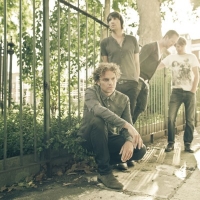 For a while there, back in the nineties, south coast post brit-poppers Toploader were ahead of the curve. They provided the soundtrack for a revolutionary cookery show from a little-known young chef called Jamie Oliver and, along with bands like Embrace, their soulful indie sound seemed a natural successor to the garage indie pop and Loaded culture of Euro 96 Britain.

It wasn't though, well, not for long. Like Embrace, Toploader enjoyed some chart success and respectable album sales but it didn't last. After six years, they jacked it in around 2003 but not before their debut LP 'Onka's Big Moka' (not 'ochre' or 'mocha') had notched-up a million in sales and six months in the UK top five.

Their biggest hit, 2000's 'Dancing in the Moonlight' - erstwhile montage music for young Oliver - was in fact a cover (gasp). Originally a hit for King Harvest in the early seventies, Toploader took it to No 7 in the UK singles chart (higher than the original). Second album 'Magic Hotel' peaked at an impressive No 3 but it was to be Toploader's last for a while.

The band re-grouped in 2009 and started putting together a third studio album, 'Only Human', which was released in June of this year. Following the new record and singer Joseph Washbourn's appearance on ITV's 'Popstar to Operastar' (he placed fourth, behind Claire from Steps), the four-piece are taking the new material on the road with an autumn tour.

The 16-date 'Only Human' tour begins on 7th October in Bristol, with a 1st October pre-tour club gig in Coventry. The tour also takes in Newcastle, London (Jazz Café), Glasgow, Dundee, Wrexham and more, before the final show at Nottingham's Rescue Rooms on 30th October.

We have tickets for all dates available now, priced just a fiver for Coventry and £10 - £15 for all other dates.

Ahead of the tour, Toploader will be headlining (in the moonlight) at Lemonfest at Newton Abbott Racecourse on 6th August. We have tickets available now at £15.