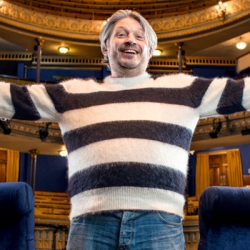 Richard Herring is a phenomenally prolific and successful stand-up comedian who this year brings his 32nd show in 20 years to the Edinburgh Fringe Festival. Some comics like to stand before a different audience every night telling the same jokes, or versions of them, sometimes for years.

Others, one senses, would be bored by the prospect, and Richard Herring falls into this category. The 44-year-old's recent material is eclectic and, at times, serendipitous, arising as does from some barely scripted adventure or equally adventurous premise.

His project titles read like a CV of sorts: 'The Headmaster's Son', 'Christ on a Bike: The Second Coming' (chronicling a bike tour), 'Hitler's Moustache' (for which he grew the trademark facial hair), 'Talking Cock' (about penises), sketch show 'As It Occurs To Me' and his book, 'How Not To Grow Up', all paint a portrait of a fun-loving mischievous manchild.

His latest creation, 'What is Love, Anyway?', inspired by the musings of 80s Welsh synth-pop maestro Howard Jones, promises to be just as entertaining. With his own experiences to count on, Herring seeks to define and demystify the notion of 'love'. From anyone else, that would sound like a lot of bunkum but from Richard Herring it seems perfectly reasonable. In his safe hands, love will prosper. And if it doesn't, you can always heckle.

Richard Herring's 'What Is Love, Anyway?' spring 2012 tour kicks off in Cheltenham on 20th January, moving on to Birmingham, Manchester, Brighton, Bath, Cambridge, Doncaster, Bridgend and Tring, before the final gig of the run (currently) in Oxford on 5th April 2012.

We will have tickets for all dates from 9AM on Friday 5th August 2011, priced £15. Tickets for Tring on 7th March are available now.

Ahead of the 2012 dates, Richard Herring will be taking 'What Is Love Anyway?' to the Edinburgh Fringe throughout August. Herring's 20th Fringe festival kicks off in Udderbelly's Pasture on the 3rd with nightly shows through to 28th August. We have tickets from £8 (previews) to £14.50.

After Edinburgh and a lie down and plenty of water, Richard Herring drops into Manchester on 18th October (£10) before venturing to London and Laugh or the Polar Bear Gets It 2011 on 18th November (£19.50).

Following that, he has six consecutive nights at the Bloomsbury Theatre appearing in 'Nine Lessons and Carols for Godless People 2011' with Robin Ince, Josie Long and others from 18th to 23rd December. We have tickets from £25.