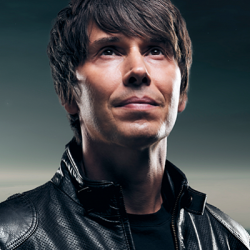 They're the Science Beatles. A modern boy-band led by Chief Mop Top and professional enthuser Professor Brian Cox. A quartet who may not claim to be 'bigger than Jesus' but will certainly have strong views on his parentage.

Not that the 'Uncaged Monkeys' are seeking controversy in any sense. More than anything, the series of live shows from Cox, comedian Robin Ince, Bad Science doctor Ben Goldacre and mathematician Simon Singh are intended to inform, educate and entertain. Think of it as Everything You Always Wanted To Know About Science But Were Too Afraid To Ask.

And they are proving very popular indeed. All four 'players' are successful in their field, are media-savvy and have an admirable appetite for teaching and, well, enthusing about their pet topics. This boyish zeal to learn and share has caught the public's imagination and saw a series of 2011 dates sell out.

The national tour, which included some big venues such as the Bristol's Colston Hall and St David's Hall in Cardiff, was one of the hottest tickets of the spring. The two-hour show won broad acclaim for its wide-ranging subject matter and its endeavour to explain complex science in terms the audience could understand. Some audience questions that couldn't be answered on the night were even addressed in a subsequent podcast which mopped up the loose ends [here: www.bit.ly/FreePrimates - Ed].

Back in July, the Uncaged Monkeys announced five new dates for December 2011, beginning with two shows at the Manchester Apollo (6th/7th), Plymouth (10th) and then two gigs at the Hammersmith Apollo (13th/14th). And they have news of a very special guest set to join them for most shows. It's time for an update, then!

As a special treat for all shows except 13th December (Hammersmith - still to be confirmed, one way or the other), piano-pounding comedian and composer Tim Minchin has been invited to pontificate and assist the quartet in their quest to solve the mysteries of the universe, perhaps with the odd song (or random theory as to why it took you so long to buy Uncaged Monkeys tickets!)

We still have tickets for all shows, priced from £25.