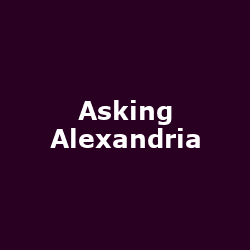 Asked to list York's top exports, you might think of underrated Britpop stalwarts Shed Seven or perhaps Viking-based tourist attractions. You could be forgiven for omitting metalcore outfit Asking Alexandria.

Not because they're not any good but because, since forming in 2008, it is in the US that Asking Alexandria have enjoyed greatest success. The band has its roots in the Middle East, with founding member Ben Bruce using the name for a short-lived outfit he launched in Dubai. Upon returning to the UK, the new line-up got together in 2008 and soon recorded their debut LP, 'Stand Up and Scream', which was released in 2009.

Asking Alexandria toured the US supporting bands like Enter Shikari and Alesana whilst working on the second record, 'Reckless & Relentless', which was released in April 2011 and made an immediate impact in America, reaching No 9 on the Billboard chart and No 2 in the Heavy Rock charts.

It sold 31,000 copies in its first week and Asking Alexandria made their US national TV debut, performing the songs 'Someone, Somewhere' and 'Closure' on Jimmy Kimmel Live!.

After a handful of spring 2011 dates, Asking Alexandria are returning with a UK tour in early 2012. The tour begins in Glasgow on 12th January, moving on to Manchester, Leeds, Cardiff, London (HMV Forum) and others, before the final gig of the tour in Portsmouth on 23rd January 2012.