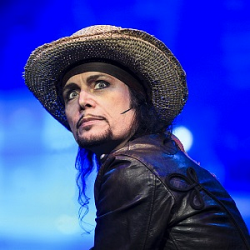 In the late seventies and early eighties, Stuart Goddard created a post-punk New Wave persona for himself as Adam Ant. Pretty in his mascara and face paint, his military jackets and leather trousers became a weekly Thursday evening visitor to living rooms up and down the nation via Top of the Pops (RIP).

As Adam & the Ants, hit singles 'Stand & Deliver' and 'Prince Charming' made No 1, followed by his first solo single, 'Goody Two Shoes' (also a chart-topper). The albums 'Kings of the Wild Frontier' and 'Prince Charming' both went platinum in the UK and his releases performed well in the US, earning him a high profile there that led to TV and movie work.

Adam Ant's distinctive style and status as something of a sex symbol brought him considerable fame as a musician and sometime actor but Stuart Goddard was not faring as well, privately struggling with the bipolar disorder he'd been diagnosed with when just 21.

After the starburst of fame, and perhaps inevitably, came something of a darker period for Adam Ant. Into the nineties, battling his mental health demons and, after long periods of ill health and medication, considerable weight gain (and loss), hair loss (and regrowth), Adam Ant was reborn.

Into the noughties, with his remarkable life documented in his autobiography, 'Stand & Deliver', Ant regrouped and began recording new material and touring with verve. The renaissance continues apace with Ant announcing the second leg of his 2011 UK tour.

The tour kicks off with Adam Ant and his band, The Good, The Mad & The Lovely Posse, playing Bristol Academy on 11th November, then Bournemouth, Tunbridge Wells, Nottingham, Leeds, Edinburgh and others, before the final show in Newcastle on 13th December.

We have tickets available now for a number of the dates (more to come), generally priced £22.50.

Ahead of the tour, Adam Ant plays two shows in Fulham at Under the Bridge on 5th and 6th August (£30) and the West Dean Festival 2011 in Sussex, headlining on Saturday 27th August (£40 for an adult day ticket).