If Not Now, When? November 2011, actually - Incubus announce UK tour 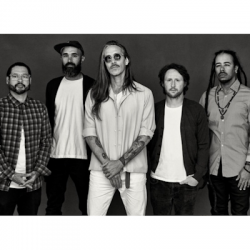 Twenty years ago, US rock and funk-metal outfit Incubus formed at high school, probably never realising that two decades later they'd be announcing another tour, likely to sell out. But then it took the band around half of one of those decades to truly get going and get noticed - 1995 came and went with the hard-to-buy and dreadfully-monikered debut full-length album, "Fungus Amongus", 1997 saw them issue a 6-track EP and land themselves a support slot with Korn, before 1998 saw them tour endlessly and chalk up larger sales for the second album, "S.C.I.E.N.C.E.".

Since those heady days of struggles, the odd line-up change and breakthroughs, Incubus are now a sure bet after continuous Top 3 albums (in the States) and yet another Top 20 album in the UK, this time with the warmly-received "If Not Now, When?", produced by rock/ metal guru and behemoth, Brendan O'Brien (Pearl Jam, AC/DC, Rage Against The Machine). Recent single, "Adolescents", gives you some idea of how the band have, well, grown up. Judge for yourself - the video is just to your right and up a bit!!

More importantly, Incubus follow up their recent Forum show, with a UK tour from 3rd November, when they will kick-off in Wolverhampton, followed by London's Alexandra Palace, Cardiff, Nottingham, Manchester and Glasgow.

We will have tickets on sale this Friday from 9am, priced at £27.50 (£28.50 for London). As with previous tours, expect massive demand for this handful of shows.