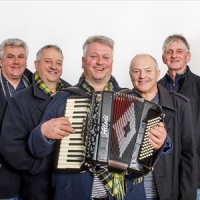 Ten-voice, all-male, innuendo-ready, Cornwall vocal group, The Fisherman's Friends, have announced a half-dozen dates to warm your cockles in the cold, short days of late autumn.

Ever since your Nan announced to the check-out queue at Budgen that she loved the taste of a Fisherman's Friend, you'll have been aware that every mention of the fabled lozenge came with a knowing smirk.

The thing about a very slightly naughty joke is that everyone loves one, even your Nan. So when the singing men of Port Isaac, Cornwall, presented themselves as The Fisherman's Friends and recorded albums called 'Suck 'Em and Sea' and 'Another Mouthful From', as well as the decidedly less edgy 'Port Isaac's Fisherman's Friends', the world groaned and smirked (knowingly).

But who knew that there was such an appetite for a capella sea shanties? The Fisherman's Friends belt out nautical and folk favourites, some with 'lewd themes', with warmth, humour and a glint in their eyes - and it is extraordinarily popular.

'Port Isaac's Fisherman's Friends' - their third LP and their first on a major label (Universal) - was released in 2010 and reached No 9 in the UK album charts. In 2011, The Fisherman's Friends won the Good Tradition Award at the BBC Radio 2 Folk Awards.

The dectet have announced six new dates, starting in Cheltenham on 22nd November, taking in Salisbury, Bristol, Plymouth and Birmingham, and finishing at the Union Chapel, Islington, on 1st December.

Ahead of the tour, The Fisherman's Friends play Falmouth's Princess Pavilion on 11th August. We have tickets available from £15. The group continues to play frequently in their hometown of Port Isaac, with dates throughout summer at the Port Isaac Platt (see below).