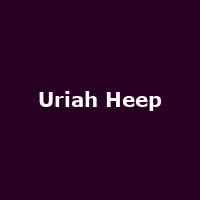 In the late sixties, Mick Box and David Byron formed the band Spice, with a desire 'to do something different'. More than 40 years later, the band that Spice became, Uriah Heep, have sold more than 30 million albums, become a byword for the creative bent of English prog rock and are, in many ways, Albion's version of The Grateful Dead.

Named after the character from Dickens' David Copperfield, Uriah Heep are the epitome of seventies prog sensibilities. Never more than a five-piece, the band has more than 20 former members with only Mick Box remaining from the original line-up. Prog rock is evidently tough on percussionists - Uriah Heep went through five drummers in the first three years.

Into the 1980s, the line-up began to steady but Uriah Heep's popularity at home began to wane. But in Europe and the USSR (as it was then), the band continued to attract new fans and huge audiences. In 1987, under Premier Mikhail Gorbachev's regime of a new openness, 'Heep' became the first Western band to play in Soviet Russia, performing ten gigs at the Olympic stadium in Moscow, playing to nearly 200,000 in the process. Uriah Heep remain hugely popular in the former Soviet states and the Balkans.

At home, they maintain a loyal, cult following. Having released their 23rd studio album this year, April's 'Into the Wild', Heep will be taking the new material (and much of the old) on the road later this year.

Uriah Heep have added another eight dates to the two already announced for December 2011. We have tickets for the previously announced gigs in Wolverhampton and Holmfirth ( 1st and 2nd December), available now priced £20.

The first of the new dates is in Brighton on 3rd December, followed by shows in Bristol, Bournemouth, London, Oxford, Glasgow and Newcastle before the final gig in Milton Keynes on 13th December.