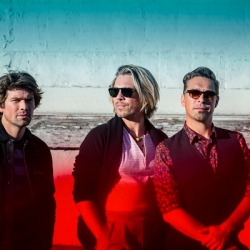 In June 1997, Diana Princess of Wales was being photographed on a yacht with Dodi Fayed, a triumphant Labour Party and D-Ream were jointly assuring us that things could only get better and Hanson were at No 1 with the love/hate hum-along hit of the summer, 'MMMBop'.

In fact, 'MMMBop' made No 1 in the US, Australia and Germany, as well as the UK where it sold around 750,000 copies, holding the top spot for three weeks.

The band behind it were a trio of brothers from Oklahoma - Isaac, Taylor and Zac Hanson - the eldest of whom (Isaac) was only 16 at the time of its release. At a time when MTV still had significant influence, Hanson, their long hair and their debut single were absolutely everywhere.

The album from the same year, 'Middle of Nowhere', was Hanson's third [!!! - Ed] and was just as successful as 'MMMBop' - reaching No 1 in the UK, turning double-platinum in the process. Around the world, the record sold more than 10 million copies.

Despite this breath-taking rise, the Middle of Nowhere was exactly where Hanson found themselves shortly after as record company mergers and acquisitions seemed to continually stymie any meaningful progress the band made. Their fourth album, 'Snowed In', released later in 1997, peaked at a miserable 87 in the UK album charts. The love affair was over.

But Hanson weren't finished, and their records - when they were free to record and release them - continued to perform respectfully in the US. Last year's 'Shout It Out', the band's eighth studio LP made the US top 30.

And after returning to the UK last month to play a sold-out "5 of 5" album-replay residency at King's College, London, Hanson have announced four autumn dates, starting in Manchester on 24th November, playing Edinburgh, Newcastle and Birmingham before the final show at the IndigO2 in London on 29th November.

The shows are the UK leg of the band's 'Shout it Out' world tour. I wonder whether they will repeat what they've done on their US 'Musical Ride' tour, where fans get to pick the set list via Hanson's official website (www.hanson.net)?

Ahead of that, you can catch them at V Festival 2011 - Stafford on Saturday, Chelmsford on Sunday. Well, you can see them if you already have tickets, that is, as day tickets for both of those dates are now sold out.