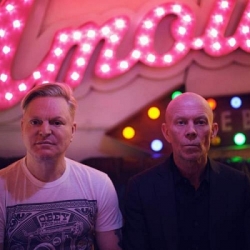 Almost 25 years ago, whilst standing knee-deep in a nightclub full of pent-up testosterone, snakebites, Hofmeister and handbags, a song called "Oh L'Amour" suddenly drowned out the deafening din of hippy-earrings and bangles by booming out of the sound-system. Its effect on the clientele was similar to that of an embarrassing relative turning up at a wedding reception, drunk as a Lord and throwing up on the cake, before falling face down into it. The hatred directed at the club's speakers wasn't too dissimilar to the riots in Greece, minus the petrol-bombs perhaps.

Anyway, that song was a grim cover-version of Erasure's third single, previously issued by Mute to close off the promotion for Vince Clarke and Andy Bell's decent debut-album, "Wonderland", as performed by the pretty pop-duo, Dollar. Thankfully, I haven't heard it since but I did finally hear Erasure's version a few years later. I certainly stopped going to that nightclub, especially after one DJ started playing New Model Army's marvellous "Vengeance" single, but only up to the end of the first chorus before snapping it in half and replacing said record with Culture Club's "Church of the Poisoned Mind".

Erasure sort of had the last laugh, as far as their musical career has gone and to say they're a bit popular is like saying milk is white - It's too much of an understatement. Decades of hits and five number 1 albums later, they've just recently finished off a tour of some of the UK's most beautiful forests, delighting several audiences and selling out all shows. Now it's time to take it indoors!

The electro-pop pair have announced a full UK tour starting in Leicester on 12th October, followed by Glasgow, Edinburgh and more, via London and Bristol, before closing it out in Brighton on 4th November. We will have tickets from Saturday at 9am, priced at £30 regionally, £32.50 for London.

The tour will feature songs from their upcoming new album, their first in 4 years and entitled "Tomorrow's World" - it'll be released sometime in October on Mute.