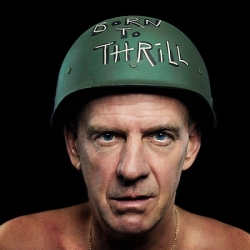 Norman Cook must be sitting at home right now, reminiscing about the good old days of leaping about on Top of the Pops and harmonizing to "Happy Hour" or "Caravan of Love" and thinking to himself, as he digs another classic 12" from a box of old vinyl, "Norman, you did the right thing leaving The Housemartins".

Because, let's face it, pretty much EVERYBODY in the '90s knew the name Fatboy Slim and most of those people bought one or two of his albums, or maybe just played out his singles to wedding-parties, house knees-ups and full-on nightclub events. I'm guilty of all but the last one, I'm afraid - "Everybody Loves a 303", what a little belter that was.

After a string of huge hit-singles such as "Rockafeller Skank", "Gangster Trippin'" and the ubiquitous chart-topping "Praise You", Cook started to cement his reputation as a global DJing force and has performed his infamous shows on Brighton Beach (near his house - not to far too lug your gear, then), Tokyo, Ibiza Rocks and even the Great Wall of China.

For his slightly less exotic UK tour, he has chosen a quartet of seaside towns - Brighton, Southend, Bridlington and Blackpool and one land-locked one, Swindon (although he has picked the Oasis centre, so it's sort of near water!). The shows will run from 1st to 10th December, with support from Jack Beats and Doorly, and we will have tickets on sale from Friday at 9am, priced at £25! The "Five Night Stand" tour will be in high-demand - I mean, who doesn't want to party their pants off in December?