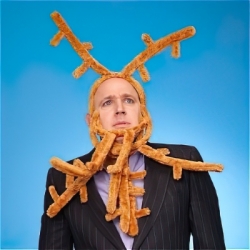 Tim Vine is a Gatling gun of gags, firing round after round of jokes into audiences wherever he goes. He even claimed the world record for the number of jokes told in an hour (499), which he held for a year from 2004.

In 2010, Vine won the Edinburgh Fringe award for the funniest joke told at that year's festival: "I've just been on a once-in-a-lifetime holiday. I'll tell you what, never again."

It's classic Tim Vine; quick, punchy, one-dimensional and funny. It's a joke that anyone can tell, which really sums up his appeal. Laughs come thick and fast, and it doesn't matter if that last one didn't raise a laugh, there'll be another along in a few seconds. They're lines you want to remember and tell your friends or colleagues.

One of the most forwarded emails ever was a list of classic Tommy Cooper one-liners - you've probably received it at least once - but not all those gags were the great man's. No, some were Tim Vine's, passed off as Cooper's. Some of the jokes in a West End show about Tommy Cooper's life were in fact written by (and credited to) Tim Vine. He's that funny.

And he can't be stopped. Ahead of another August splitting the sides of Edinburgh audiences, he'll be warming up by hosting his Chat Show, where Vine interviews randomly-selected members of the audience.

He'll be chatting at The Albany on 4th, 11th and 20th July. Tickets are available now, priced just £6. The Kingston date (19th July) has now sold out.