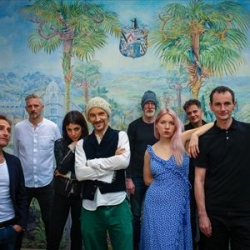 25 years ago, an exciting and frenetic guitar-band leapt into the Manchester music scene, with a gangling lead-singer and barbed lyrical observations. Since those heady days of gigs in spit-and-sawdust bars and venues, James have blossomed into a band that has always been on the verge of great things, yet never quite become the shallow pop-band that major-labels were hankering for.

The humble beginnings of their shambolic early EP releases on Factory records, paved the way for Sire to sign them up and polish their sound up a bit. First album, "Stutter", still retained the anarchic delivery of earlier works, yet also displayed a maturity that belied their tender ages. No hits - but that was soon to follow...

A label-switch to Fontana was rewarded with a re-issue of the single, "Sit Down", as 'stadium' a track as you could possibly get - and the rest is still history (they haven't equalled that single's heady heights of number 2 since). Afterwards they got to work with their hero Brian Eno, knocked up an extended dub album with Primal Scream producer Andrew Weatherall and continued to bang out no less than 10 consecutive Top 20 albums!

They can also still fill large venues, which is probably a good thing when you consider what locations they have chosen for their next UK jaunt - they are realising their dream of touring with a full orchestra and choir in large symphonic halls! Now how special does that sound?

Initially, the idea of working with Joe Duddell's Orchestra of the Swan and The Manchester Consort came about after a Manchester vs Cancer concert in 2009, after which they vowed to repeat the exercise on a grander scale and further afield - hence this new show. It is likely that each show on the tour will be unique with a different set-list and order each night. Duddell has noted that "James rarely play the same song twice" - that's a statement that gives you a few clues as to where this is all heading!

First stop is Cardiff on 23rd October, followed by shows in all the usual big cities until returning to London for the final show at the Royal Albert Hall on 4th November, all priced from £22.50 to £25. NB - There are two performances for Manchester at the Bridgewater Hall on 31st Oct and 1st November - the prices are £35, which can only mean there is something very special planned for their hometown. Tickets will go on sale at 9.30AM on Friday!