Wicked in the West End now booking until late 2013

Posted: 1st October 2012
The Wizard of Oz spin-off continues at the Apollo Victoria for another year - bookings now being taken 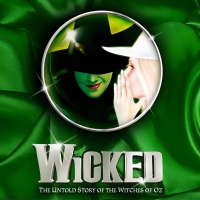 Although there have been attempts at sequels and spin-off productions, the 1939 'Wizard of Oz' film starring Judy Garland remains the definitive adaptation of L Frank Baum's novel 'The Wonderful Wizard of Oz'.

There have been occasional 'Journeys' and 'Returns' to Oz and, most notably, even a hit musical - the Tony award winning 'The Wiz'. 'The Wiz' was an African-American take on the tale, featuring an all-black cast and later turned into a film starring Michael Jackson (as the Scarecrow). Of course, in more recent times, Andrew Lloyd Webber used prime time Saturday BBC1 to cast himself a new Dorothy for his production of The Wizard of Oz.

Wicked premiered on Broadway in 2003 and, inevitably for a 21st century fairy tale prequel, it contained pretty young women competing for the affections of a man (and much more). There are even some Adult Situations.

By sidestepping Baum's sacrosanct tale, Maguire's story gets away with it and the musical version was an unconfined, bona fide smash. It continues to sell out home and away, and has a full trophy cabinet including the 2010 Olivier Audience Award for Most Popular Show. In fact, it is so popular that it is now booking for next year, right up until November 2013.