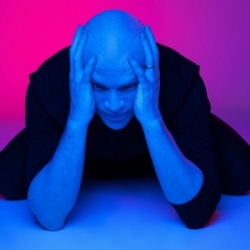 When I worked for a family-run second-hand record shop, many years ago, one of my colleagues was a fan of rock and metal. He was (and probably still is) a West Ham fan but, hey, no-one's perfect (just kidding, Kevin). My favourite quote uttered by the most mild-mannered delivery driver I've ever met was, "I do like my metal to have a bit of crunch", to which he followed up this statement with three tracks by the band, Strapping Young Lad - they sounded like a jet-engine with drums but I could see his point of view.

Not surprisingly, Devin Townsend has had a lucrative solo sideline, since the mid '90s (SYL had a huge cult-following). But it was in 2007 when his solo career became permanent - the band split, leaving Townsend to pursue other musical interests, including a series of albums under the Devin Townsend Project. If you're lucky enough to have got tickets for the two Union Chapel shows in November, you'll experience the full monty of "Ki" and "Ghost", the latter being his latest current album.

However, if you're not near London, or in fact Belfast for his show with Turisas on 7th November, you can catch the man in mellower mood during August. He'll be playing three acoustic shows in Brighton, Southampton and Exeter from 9th to 11th August, armed with another rocker-turned-strum-meister, Dave McPherson (from InMe). Tickets are on sale now and cost £12 - expect high demand and renditions from his four Project albums, plus extracts from "Ghost 2", another new set due for issue before the end of the year.