Win a copy of Tellison's new album, 'The Wages of Fear' via our Facebook page 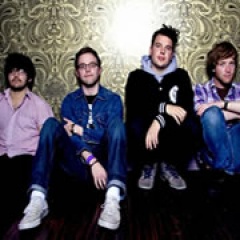 Today, we have a copy of the recently-released second album by upcoming British indie-rock outfit, Tellison. After issuing their debut album as far back as 2007 (entitled "Contact! Contact!"), the band embarked on tours and released a multitude of singles and an EP, before heading back to the studio with acclaimed producer, Peter Miles, who has worked with Frank Turner, The King Blues and Futures amongst others.

Those 2010 sessions with Miles have spawned the dozen songs on "The Wages of Fear", issued by rising indie-label, Naim Edge Records - and it's a bit of a beauty! It features the single, "Collarbone", and is rammed to the gills with earnest rock riffs and an element of fun.

Our man Adam Hardy gave it a glowing review recently by exclaiming, "After years of touring and slots supporting the likes of Biffy Clyro, Hot Club De Paris and Jonny Foreigner I don't think it will be long until those bands are repaying the favour. Their sound is very much in the same vein as the aforementioned Biffy Clyro when it comes to doing big rocky numbers that make you dance like an idiot in your car as well as the slow soft numbers that tear at the heartstrings and bring you to tears". Well, quite.

The competiton is a prize draw, with the winner chosen at random, open to UK/ Eire residents only. It closes at midnight on Monday 27th June. The winner will be notified during the week - make sure your Facebook settings allow you to be contacted!