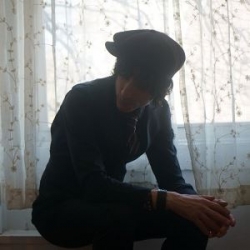 Formerly a bit of a glam-rocker in the band D Generation, Jess Malin has booted the eyeliner to one side and concentrated on song-writing as a solo-artist for the best part of a decade now, only stopping occasionally to enlist help from the not-dissimilar ex-Whiskeytown frontman, Ryan Adams, for production duties and matey camaraderie.

His debut album, "The Fine Art of Self-Destruction", appeared in 2002 with Adams at the helm and all recorded in less than a week. Despite not charging up the album charts, Malin's debut was revered and acclaimed by most music-critics and a fan-base gradually grew to a modest size. Some ten years later and the singer-songwriter has rubbed shoulders with the likes of Bruce Springsteen (on 2007's "Glitter in the Gutter") and formed a new band, St.Marks Social. So far they've issued just one album under that collective moniker, last year's "Love it to Life".

Malin is currently supporting his old mucker, Ryan Adams, on his UK tour, but afterwards it will be headline-time for him and his band. The makings of a UK tour are developing with a few dates starting to trickle out, the first of which are in Manchester on 22nd Nov, followed by Glasgow (23rd), Newcastle (24th), Liverpool (26th), Nottingham (27th), London (28th) and Bristol (29th). The first two and last two dates are on sale now, with Newcastle and Liverpool hitting the servers early on Saturday morning - prices start at £11.50.