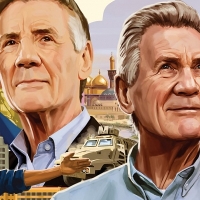 Just as the Monty Python story was fading into legend, a new generation embraced the surreal brilliance of Eric Idle and co when the musical 'Monty Python's Spamalot' hit North America in 2004. The title is taken from a lyric in the Python song 'Knights of the Round Table - "We dine well here in Camelot / We eat ham and jam and spam a lot". Who doesn't?

The song features in the 1975 film 'Monty Python and the Holy Grail', and the accompanying dance routine parodies the musical genre somewhat, with its high-kicking knights and ludicrously convenient rhymes: "We're knights of the Round Table / We dance whenever we're able". In retrospect, it was made for Broadway.

And so it proved. Idle wrote the book for Spamalot - 'based loosely' on the Holy Grail movie - with new music coming from John du Prez, which features alongside some classic Python songs. The combination, coupled with the undiminished appetite for 'original' Monty Python work made the show a colossal hit.

Runs on Broadway (which yielded a Tony award) and in the West End followed before Spamalot began touring, selling out everywhere. The 2008 West End run, at the Palace Theatre, sold out every one of its more than 300 performances.

Throughout 2010 and this year, the UK tour has sold out at every turn. And now 48 new dates have been announced for early 2012. The new run will begin with six shows at the Liverpool Empire from 16th January 2012, with a subsequent half-dozen shows in each of Oxford, Grimsby, Torquay, York, Edinburgh, Birmingham and Sunderland, with the last show at the Sunderland Empire on 21st April 2012.

The new dates follow a run at the Theatre Royal in Brighton from 15th December 2011 to 14th January 2012, tickets for which are available now starting at around Â£25.