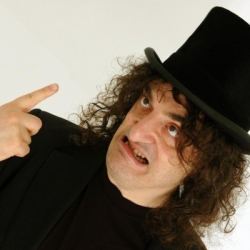 It takes a lot to rile Canadians. But 'comedian, magician and psychopath' Jerry Sadowitz has got what it takes. At the 1991 'Just For Laughs' comedy festival in French-Canadian Montreal, he opened his performance with "Hello moosef**kers!"

As the crowd bristled, Sadowitz continued: "I tell you why I hate Canada - half of you speak French, and the other half let them." Duly provoked, a French-Canadian audience member assaulted Sadowitz, knocking him unconscious.

It's a shame that the US-born, Glasgow-raised stand-up is still probably best known for this incident rather than his devastatingly acerbic wit and not inconsiderable magic skills.

Immediately recognisable, with his top hat and mad-cow stare, Jerry Sadowitz is as unpredictable as he is funny and his adults-only routines continue to attract risk-taking comedy fans everywhere.

In December, in the middle of Stewart Lee's 50-odd date run at the Leicester Square Theatre, Sadowitz will be embarking on his own residency at the same venue. Lee may have prime time and a weekly matinée, but Sadowitz gets the late night slot, refilling the main auditorium after Lee has retired to his dressing room. There are a few 7.30pm performances when Lee has a night off but the vast majority of Sadowitz's shows kick-off at 10pm.

Tickets for the run, which begins on Tuesday 6th December, are £18.50 for Monday to Wednesday shows and £22.50 for Thursdays, Fridays and Saturdays.

The London residency follows a series of autumn dates around the country, starting in Bath on 27th October. Tickets for the tour dates are available now from £18.

Entry for all shows is strictly over-18s only.