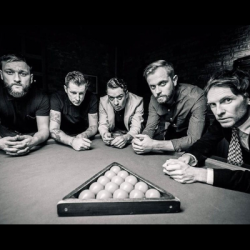 For a band that cites Black Flag, The Specials, Minor Threat and The Clash amongst its influences, The King Blues have done rather well by earning a Top 40 album with the acclaimed (and very raucous), "Punk and Poetry". When you consider some of the talentless detritus filling up the airwaves like aural landfill, it's always nice to cop a potent mixture of punky, reggae, party rockers, as exemplified by the suitably aggressive tracks, "We Are F**king Angry" and "Headbutt".

The band are all geared up for some festival action which will include Glastonbury this weekend, followed by the 1234 Festival 2011 in Shoreditch (9th July) and the 2000 Trees Festival 2011 (15th July). Their planned appearance at the First Days of Freedom Festival has been dashed due to the Kent-based shindig being canned owing to a lack of funds.

Either side of these festival slots, the band have a handful of headliners, including a pre-Glasto knees-up in Falmouth on Thursday (still up, £12), as well as Southend, Rhondda, Swansea, Ivylive (in South Devon) and Portsmouth at the end of the summer (also still up, £10 - £12).

The good news continues with further touring activity earmarked for November, starting with London's Roundhouse venue on the 2nd, followed by Birmingham, Manchester, Glasgow, Norwich and Exeter on the 8th - more shows may get added but, meanwhile, the remainder will go on sale on Wednesday at 9am, except the London date which is on sale now for £15.