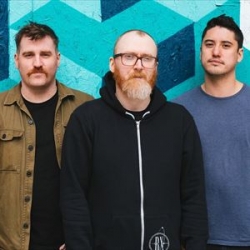 The list of people from Mold in North Wales that have conquered the world is a relatively short one, as it is for most towns. There's actor Rhys Ifans, star of 'Notting Hill' and the latest Harry Potter movie, and then there's the landscape painter Richard Wilson but that's more or less it.

Until 2011, that is, when Mold's own The Joy Formidable emerged as a force to be reckoned with and an unlikely (if merited) success cross the pond. The release of debut long-player, 'The Big Roar', in January precipitated a phenomenal rise that has seen The Joy Formidable courted by the UK and US music press and their track 'Whirring', declared the year's best by Dave Grohl. Their performance at SXSW in Austin saw them declared the act of the weekend by the LA Times.

The trio had formed in 2008, self-releasing the eight-track EP 'A Balloon Called Moaning' later that year. They spent 2009 supporting bands like the Editors, Temper Trap and Passion Pit. The Joy Formidable were introduced to US audiences when Passion Pit invited the band to open two sold-out shows at New York's Terminal 5.

After summer 2011 festival performances at Glastonbury, Reading and Leeds, Lounge On The Farm, Lovebox and Wakestock, The Joy Formidable play the HMV Institute in Birmingham on 13th October, followed by gigs at London's HMV Forum, the Manchester Academy, and then in Dublin, Belfast and Glasgow, before the final show of the tour in Newcastle on 20th October. The Joy Formidable also perform at the Cardiff SWN Festival on 21st October.

Tickets for the tour dates will go on sale on Friday 17th June at 9AM, priced £11.50 (£14 for London). Support on the tour comes from And So I Watch You From Afar and Creatures of Love, the latter of whom have previously supported The Joy Formidable before, albeit at smaller venues. This looks like a prime time for the electro-darkwave trio, who issued a six-track sampler EP last year to some acclaim. They have now announced a 'proper' CD (very limited), download and video to come in July and a launch night at Dalston's Servant Jazz Quarters on 21st July.