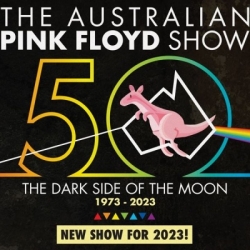 The Australian Pink Floyd Show are not just another tribute band. For starters, they've sold more than three million gig tickets in more than 35 countries. Not something The Nappy Mondays or Jon Division can boast.

Despite those stunning stats collected in a 23-year career, The Australian Pink Floyd Show are something of a contradiction as a 'band' - they've never written a single song or released an album. Why would they, of course. Pink Floyd enjoy a hallowed place in the hearts and minds of prog-rockers everywhere and the source material for a tribute act - and the hunger of fans to see it performed live - is second to none. This Pink Floyd tribute are in more demand (and more successful) than any of their Beatles counterparts.

But The Australian Pink Floyd have released DVDs of shows and it is these landmark live performances that have been key to the band's success and why the Sunday Times felt the need to label them 'The best tribute band in the world'. So good are 'TAPFS' that David Gilmour himself booked them for his 50th birthday party celebrations.

The music in the show is, well, the best of the Pink Floyd back catalogue, delivered with the dexterity and precision that follows two decades of practice. In addition, the 2011 'Exposed in the Light' tour brings with it not only the trademark lighting and laser show, but a brand new quadraphonic sound system and 'cinema quality' 3D visuals. The 3D stereographic video technology is the same as used in cinemas, where the audience wears 3D polarized glasses to create the illusion of images reaching out.

The tour will be coming to the UK with more than 20 dates in early 2012, starting in Dublin at the Olympia Theatre on 23rd February, crossing the Irish sea and heading to the Edinburgh Playhouse on 26th February and ending in Basingstoke on 3rd April. Highlights in-between include the SECC in Glasgow, the Liverpool Echo Arena, Bristol's Colston Hall, the huge National Indoor Arena in Birmingham and Cardiff's Motorpoint Arena. Some big venues in there.

Tickets for all shows are available from 9AM on Friday 10th June (Monday for Dublin). Prices start at around £30 (32.60 for Dublin).