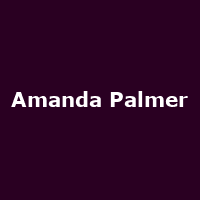 Amanda Palmer is one half of The Dresden Dolls and is also one half [quite literally - Ed] of Evelyn Evelyn. Since 2008, she has been releasing music and performing as the whole of Amanda Palmer, occasionally known as 'Amanda Fucking Palmer', AFP to her friends.

A career that spans performance art, music and writing, Amanda has never been that far from controversy. After she released the video for her single 'Leeds United', Palmer told fans (via her blog) that her label, Roadrunner Records, wanted to cut shots of her midriff from the promo because they thought she "...looked fat". Cue 'The ReBellyon', a movement by her fans to submit images of their own stomachs, ultimately published in a 600-page title, called 'The Belly Book'. AFP and Roadrunner fell out and, protractedly, she was released from her contract.

She has also upset Oasis fans (who hasn't?), with her song 'Oasis' - an allegorical tale about rape in the context of correspondence with the Oasis fan club. UK TV channels reportedly refused to play the video due to its 'making light of rape, religion, and abortion'. Palmer's retort was typically one-fingered.

AFP has also upset Katy Perry and the whole of America's conservative right by attacking Perry's 'I Kissed a Girl' song, in the process staging a mock abduction of a Perry lookalike (having kissed her), and forcing the enslaved bubble-gum popster to 'marry' Palmer. It was intended by the bisexual AFP to protest against the controversial 'Proposition 8' law, intended to make illegal any same-sex marriages in any state introducing the amendment.

Amidst all of this excitement and drama is some music. Debut LP, 2008's 'Who Killed Amanda Palmer', received mixed reviews. 2011's sophomore, 'Amanda Palmer Goes Down Under', written on her 2010 Australasian tour and with an Antipodean theme, has fared better. Not least in Australia and New Zealand. 'Vegemite (The Black Death)' is particularly catchy.

Amanda Palmer is returning to the UK for her first gigs here for over a year, with four dates in late summer. On 25th August, AFP is at the HMV Picture House, Edinburgh, in Glasgow on the 28th, then Brighton on 1st September and then at London's Heaven the next night.

Tickets for Edinburgh are available on Saturday 11th June from midday, priced £14. Tickets for Glasgow are on sale now (£14). The Brighton and London gigs go on sale on Friday 10th June at 9AM, priced £14.50 and £16.50 respectively.

There are also hints on her website (www.amandapalmer.net) that there will be a secret gig in London on 5th September and possibly the night before. So keep your diary - and your outrageous outfit - free for those nights.