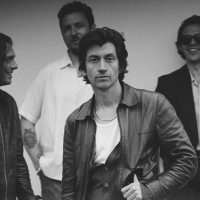 Sitting pretty on top of the midweek Official Top 100 Album Chart at the moment is "Suck It And See", the latest (and fourth) album from Sheffield's Arctic Monkeys. It'll probably stay there until the full chart is published on Sunday, making it four-in-a-row for the band whose rise to glory seems to have been immediate - but it hasn't.

The band formed in 2002, but it wasn't until 2005 when Domino issued their insanely-catchy debut single, "I Bet You Look Good On The Dancefloor", that thousands of students began to adorn their bedsit walls with posters, their backs with T-shirts and, most importantly, their hi-fis and iPods with Arctic Monkeys' explosive inaugural release. The pattern has continued ever since, with the rest of the country gradually jumping on board by the time the album, "Whatever They Say I Am, That's What I'm Not" (title inspired by dialogue from the classic film, "Saturday Night, Sunday Morning").

Fast forward to 2011 and the wagon still has four very able wheels on it - suffice to say the band are set to follow up their stints in Sheffield (Don Valley Bowl this weekend), the iTunes London Festival, T in the Park and V Festivals, with a full UK arena tour. First stop is Nottingham on 28th October, followed by the O2 Arena, Cardiff, Manchester and a handful more until Liverpool on 9th November. Tickets are due to go on sale at 9am next Friday (17th June). I'll bet you'll look good in the audience!