From Crowded House to Pajama Club - it's the shape of Finns to come with new band, album and July 2011 UK tour 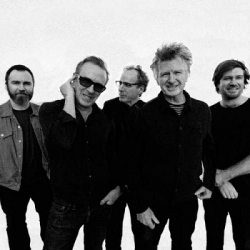 Sometimes, the simplest of lyrics can be sung inch-perfect and played without huge fanfare. The above short couplet was written by New Zealander, Neil Finn, during his tenure as frontman in Split Enz. Despite a few more minor hits, the band imploded in 1984, the Finn brothers separated for a while, before reconvening as the multi-million selling Crowded House. This certainly was a case of 'History Never Repeats' - they became a worldwide success, rather than just a notch on a few homeland (and US) charts.

All good things come to an end and, once again, the Finns finished Crowded House off in 1996 and set about recording new material as The Finn Brothers, even scoring a few minor hits in the UK with "Won't Give In" and "Nothing Wrong With You". Neil Finn also issued solo albums but, with news of this latest project, he clearly misses a band environment.

Thus, Pajama Club has been born, although very little in the way of recorded material is out there in internet-world - except the song "From a Friend to a Friend", enclosed on this page.

In addition to a forthcoming new album, Finn and the band (which features his wife Sharon), are about to hit the UK with several shows, including a trio of London gigs in various smaller venues (Borderline, Bush Hall and XOYO), plus shows in Glasgow, Birmingham, Brighton and Bristol. All the concerts take play during July from 16th to 27th, which means they may add more dates in time. Prices start at £15, which is a wee bit cheaper than the £300+ price bracket for Finn's New Zealand quake fundraiser at the Savoy Hotel on 5th July!