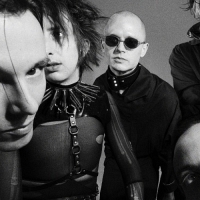 In recent years, Southend-on-Sea has had a bit of a music renaissance. Yes, that's Saaarrrfend, mate. Bands such as These New Puritans and The Horrors have helped to cement a small music-scene in a town previously blighted by the name Busted - things just had to get better. The former haven't quite scaled the heights of the latter, but give it time and they just might.

Meanwhile, The Horrors have a third album planned for release on 11th July - entitled "Skying" and issued on XL Recordings, the 10-song set contains Zane Lowe's recently-proclaimed Hottest Record In The World, "Still Life". You can give it a whirl by clicking on the sexy white 'play' triangle on the player, above - it's rather good.

The Horrors are already performing a few dates in June in Glasgow, Manchester and London, as well as a raft of festival slots at Wireless (supporting Pulp), Field Day, the Eden Sessions and Reading/ Leeds, but now they've lined up new shows for October, including Norwich, London (this time at the Roundhouse), Birmingham, Leeds, Newcastle, Liverpool, Oxford, Bristol, Portsmouth, Brighton and Nottingham. Tickets will go on sale Friday from 9am, priced at Â£12 (Â£15 for London).