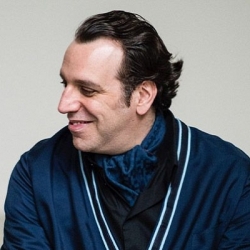 Gonzales/Beck has a track record for the slightly bizarre and unpredictable and is also a world record holder for longest solo-artist performance - an exhausting 27 hours, 3 minutes and 44 seconds.

Thankfully, audiences at Gonzales' autumn residency at London's Soho Theatre will not be expected to remain in their seats for 27 hours but will instead be treated to the orchestral rap of The Unspeakable Chilly Gonzales. Never one to be constrained by conventional thinking or genre, Gonzales has turned to orchestral rap off the back of working with fellow Canadian Feist on her latest album.

Prior to that, he lists pop, alternative rock, electronica, award-winning film soundtracks and virtuoso piano performances alongside even more eclectic ventures, such as earlier alter ego, 'Jewish super villain', MC.

The self-proclaimed musical genius has a seven-show residency at London's Soho Theatre, from Wednesday 28th September until Friday 7th October. Tickets are available now from £10 for the 28th and 29th September and from £15 for the remaining dates.