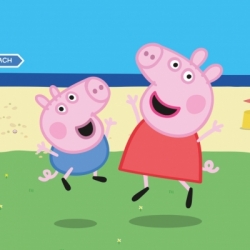 If you haven't any children around three to six years old, then borrow some from a friend or relative or find another excuse to catch Peppa Pig.

Peppa airs daily on Channel 5's Milkshake kids show, and also on Nickelodeon's Nick Jr, and it is a work of genius. For the uninitiated, the main focus of each episode is Peppa (a girl pig) and her family and friends as they go about various daily tasks and projects, from a school day trip to the railway to Daddy Pig building a house. Daddy Pig seems to be an engineer or architect of some kind, he claims his job is "quite complicated - I take big numbers, transmute them, and calculate their load bearing tangents."

Along with her brother George, Peppa's daily five-minute adventures include a large support cast involving families of rabbits, donkeys, sheep elephants and cats, among others and not forgetting Dr Hamster the vet.

Peppa Pig is also no stranger to controversy. Following complaints, some early episodes were edited to add a car seatbelt after one had been omitted and, perhaps most notably, Peppa found herself in the eye of a political storm as she refused to endorse the launch of the Labour party's 'families' manifesto during the run-up to the general election of May 2010. Who knows what they could have achieved with this little pig on the team. Peppa could have been Minister for Environment, Food and Rural Affairs.

Before you snatch some toddlers (from consenting parents) and fill your lives with Peppa, be aware that, commercially, Peppa Pig is a phenomenal success story. Seven years in, Peppa merchandise is generating £200 million a year in the UK alone, the show is licensed in more than 60 countries and, undeterred by the financial wreckage of Noel Edmonds' Blobbyland, Peppa Pig World opened in 2011.

Much of that revenue will have been generated at Christmas, and 2011 is set to be no different as Peppa Pig has announced she will be appearing at London's Criterion Theatre from 2nd December until the New Year, in Peppa Pig's Treasure Hunt.

Into 2012, Peppa will also be doing two shows in Birmingham in April. This follows a summer of appearances including Lowestoft, Wirral, Cardiff and Portsmouth and two shows supporting Gareth Gates, Let Loose and Leon Jackson (surely Peppa is top of the bill). Some tickets are still available for these shows - check the links below.

Tickets for the London run go on sale on Saturday 28th May at 10AM, starting at £13.50. Don't tell the kids until you've got the tickets.