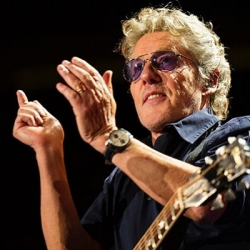 Well it's all happening at Daltrey Towers at the moment, so much so that today his promoters (IML) announced a few changes to his upcoming "Tommy" UK tour, resulting in a few cancellations and a few replacements - so just what the heck is going on?

Put simply, Daltrey will now no longer be performing in Alcester on 3rd July, Harrogate on the 17th or Exeter on the 24th. Instead, he's off to Wolverhampton in place of Alcester (3rd - tickets on sale Friday at 9am), Sheffield in place of Harrogate (17th - on sale Friday at 9am) and a second night at the IndigO2 on the 24th, instead of Powderham Castle(on sale now - £45). For refunds, IML advise contacting the ticket agent from where you purchased your now-cancelled ticket(s).

All other dates, at time of going to press, are unaffected. Meanwhile, the reason for the cancellations appears to have been revealed by the affected Exeter venue, pointing the blame at poor ticket sales and general public apathy towards a classic show which features the entire Tommy album AND a pile of The Who's greatest hits. What more do people want? Dizzee Rascal?