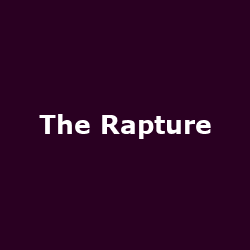 Talk about timing - last week we were all preparing for the end of civilisation (and Slough), wondering if a big hole in the ground would open up before us and suck us into a molten abyss, rather like being dipped into a huge lava curry. This week, having survived the so-called 'rapture', we have, er, The Rapture returning to our tour and new-release radars - coincidence? Possibly not.....

The band have actually been busy recording new material with Phoenix and Cassius collaborator/member, Phillipe Zdar, and are now ready to unleash it onto the European public during September. They've signed to DFA/Modular, so expect a beefed-up set of dance-flavoured indie-rock as per usual, but with the quality control cranked up even further. Oh, it's called "The Grace of your Love".

At around the same time, The Rapture will be knee-deep in a European tour, which naturally includes the UK. So far, the band have only announced two dates in London and Manchester - but these are sure to sell out fast so pay attention!!

First stop is The Academy in Manchester on 7th September (£13.50), followed by London's XOYO on the 8th (£15). Tickets go on sale this coming Friday at 9am and you can expect a brand new sound (they have trimmed down to a trio) and "House of Jealous Lovers" and "Get Myself into it", no doubt.