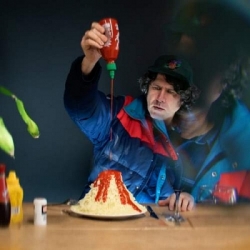 Gruff Rhys has always seemed to approach his musical career with a sense of fun. From Super Furry Animals' stage inflatables to his latest solo album, Hotel Shampoo - which takes its title from Rhys' large collection of mini shampoo bottles from hotels around the world - Gruff Rhys has always been good for a laugh.

This playful approach, and the fact that much of his work is in Welsh, has meant that he has never been taken quite as seriously as his music merits. But the times, they are a-changing (happy 70th Bob) and with Hotel Shampoo - his third solo album - Rhys is building on his reputation as a revered songwriter.

Super Furry Animals may still be going strong after nearly two decades and 2007 electro-pop side project Neon Neon may have been a critical success, but it is Gruff Rhys' solo work that has the industry (finally) taking him seriously. And rightly so.

Hotel Shampoo was released on Valentine's Day 2011 and Rhys' will be airing the new material at Glastonbury 2011, Truck Festival 2011 in Oxfordshire, Field Day 2011 in Hackney and on an autumn UK tour. So far, ten dates have been scheduled, starting in Llandudno (where else) on Sunday 2nd October and ending in Ashford in Kent on Thursday 13th October. The busy period in-between sees Gruff Rhys visiting Cardiff, Dublin and Edinburgh among others.