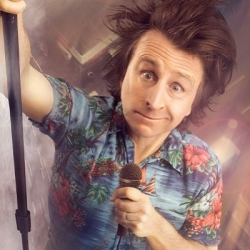 Many moons ago, stand-up comic Milton Jones delivered one of the best jokes of all time ('Auction Man') but it is probably his more recent outings on Mock The Week that have caught the attention of a new generation of fans.

As Dara O'Briain and the panellists on MTW would fall silent to hear the latest comic atrocity to plop from Frankie Boyle, so they would wait in awe on every word Milton Jones spoke, never entirely sure where it would lead. Boyle was at times just as surprising but his edgier material inevitably led to one place - a Monday morning meeting with the no doubt fatigued Head of Light Entertainment.

No, Milton Jones is, for the most part, a comedian your Nan would like, although his meandering deadpan delivery is some way from the laugh-a-second comedy of Lee Evans or the rapier wit of Nan's favourite, the late Bob Monkhouse. His MTW introduction to a noughties audience came sometime after his emergence as a comic talent - in 1996, he won the Perrier Award for best newcomer at the Edinburgh Fringe - but he is as popular now as he has ever been.

'Britain's funniest Milton', is continuing his national tour, 'The Lion Whisperer', throughout 2011 and - thanks to phenomenal demand - more dates are being added all the time.

The first of the six new gigs is York on 30th October, followed by Southport, two dates in Birmingham, then Grimsby and a return to Oxford (where he visits this month).