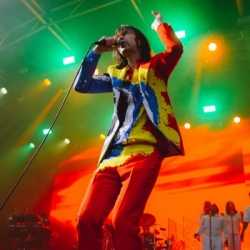 With its Orange Wednesday cinema 'club' and Orange RockCorps, where community project volunteers get a ticket to a gig in return for hours served, the mobile phone giant has displayed a knack for publicity and promotion at least as good as their network coverage.

Six years after it was launched - and three since Orange put their name to it - RockCorps is back in 2011 with an excellent 'free' gig at Wembley Arena on 12th July. Primal Scream will headline, fresh from their Screamadelica European tour, and will be supported by Jessie J and Eliza Doolittle, with more artists expected to be added.

The programme invites young people to undertake four hours of volunteer work in a RockCorps project to earn a ticket to the gig. It is public relations genius. All volunteer projects are completed in partnership and for the benefit of local charity partners.

This year's programme continues with a series of 150 volunteer projects in Greater London, across 32 London boroughs, with volunteers earning their tickets to the concert at Wembley Arena. In previous years, there have also been gigs in Manchester although no announcement has yet been made for 2011.

Bagging indie giants Primal Scream AND the year's mostly hotly tipped talent in Jessie J would be a coup for any promoter and, even for a huge venue like Wembley Arena, demand is likely to be very high. And, for once, it's not about the pricetag.

Visit www.orangerockcorps.co.uk to find out more about the gigs or the volunteering programme, or call 0800 954 7625 to register your place. But be quick.