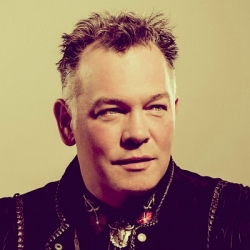 The government has previously, in its infinite wisdom, announced that Britain is full of bingeing idiots (I think 'whingeing electorate' is what they're looking for, but hey), hell-bent on self-destruction through over-eating, drinking bouts and sexual promiscuity. Sounds great, where do we sign up? Well, you could do worse than sign up for a very different form of excess - comedy and music bingeing and critically-acclaimed all-round clever-pants, Stewart Lee, is your irresponsible host.

From 27th to 30th May inclusive, Stewart Lee's Austerity Binge will muscle its way into the South Bank complex with a series of shows curated by the 41st Best Stand-Up Ever (unofficially), forming part of the venue's Festival of Britain series. I'm not joking when I say that this is a serious mini-contender to Ray Davies' Meltdown in the summer!

Lee will kick off the long weekend at the Royal Festival Hall with his Vegetable Stew on the Friday night, which is a show of six 30-minute stand-up routines, back-to-back. Previously aired for his recent TV series, tickets are just £15 for 3 hours of solid comedy.

Music takes centre-stage for the Saturday shows, starting with a spot of John Cage appreciation in the Purcell Room (£12.50). Pianists Steve Beresford (formidable musical-CV alert) and Tania Chen will accompany Lee as he delivers the 90-minute spoken-word and piano piece, "Indeterminacy".

Meanwhile, over at the Queen Elizabeth Hall at the same time, luminaries from the world of folk-music head off "In Search Of Nic Jones" (£20). Ashley Hutchings, Martin Carthy and Jim Moray head up an impressive line-up of like-minded folk-bods performing Nic Jones classics, with the man himself due to appear with his old group, The Bandoggs.

Sunday is all about the early '80s with two similar, yet contrasting, shows. The Royal Festival Hall will present the "At Last, the 1981 Show" (£17.50 - £19.50), starring an array of poetically and politically-inclined comedians and wordsmiths from the era including Alexei Sayle, John Cooper Clarke, Arnold Brown, Nigel Planer and Red Dwarf's Norman Lovett, plus a very, very rare appearance from John Peel favourites, Frank Chickens (Japanese cabaret). If they don't perform "Blue Canary" or "We Are Ninja", I'll eat my foot.

Talking of John Peel favourites, The Nightingales and Vic Godard & The Subway Sect will co-star in the Purcell Room for a spot of post-punk, new-wave and whatever other descriptions you can dream up. The late DJ is quoted as describing the Birmingham stalwarts thus: "One day, their excellence will be confirmed as other, infinitely better-known bands, stand revealed as charlatans" (not Tim Burgess' boys, you understand). Tickets are £15, which is the same maximum price to pay for a gig of 21st-century nu-folk persuasion, featuring new stars Trembling Bells paying props to their hero Mike Heron, who also appears as the support(!).

The whole weekend is a great way to pig-out, methinks!