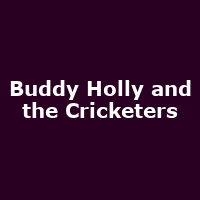 Buddy Holly and the Cricketers

Buddy Holly died in a plane crash in poor weather in Iowa on February 3rd 1959, along with celebrated musicians of the day Riche Valens and The Big Bopper and the plane's pilot (the criminally under-mourned Roger Peterson).

The Big Bopper (aka JP Richardson) was on the flight at the expense of Holly's band mate Waylon Jennings (there was only room for three passengers) as the Bopper had flu and couldn't manage the bus trip to the next tour venue. Another band mate of Buddy Holly, Tommy Allsup, then lost his seat to Richie Valens following a coin toss. On such small things history can turn.

That the talents of The Big Bopper and Richie Valens were lost amidst such serendipity could have been the big story but, in Buddy Holly, who had initiated the chartering of the plane, the world had lost a rock'n'roll legend.

Just 22 when he died and having enjoyed less than two years of success, Buddy Holly's immense contribution to the world of popular music is all the more remarkable. It's the stuff of fairy tale. He saw Elvis perform, he changed his style. He supported Bill Haley, he was signed to Decca. His surname - Holley - was misspelled on the Decca contract and he adopted it as his stage name (he'd been known as Buddy for years).

Inspired by Elvis and Chuck Berry, Holly gave the world 'True Love Ways', 'Rave On', 'Every Day', 'Peggy Sue' (originally Cindy Lou), 'That'll Be The Day', 'Maybe Baby' and 'It Doesn't Matter Anymore'. But his contribution cannot be adequately summed up in an online preview piece.

What you need is a full-blown award-winning musical extravaganza that tells the whole tale, complete with an authentic soundtrack and sing-along choruses. Better still if that production could come to a town near you.

Buddy - The Buddy Holly Story will be visiting Carlisle, Birmingham, Grimsby and Liverpool at the end of 2011, with six shows in each location. These dates follow July runs in Edinburgh and Whitley Bay.

Tickets are available now, priced generally around Â£20 (from Â£12.50 for some dates).