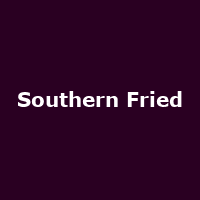 On my way to the Scottish Highlands recently, the train passed through the city of Perth, a pleasing looking city in the morning sunlight. I imagine the place is even more agreeable during its annual American-roots shindig, held during the height of summer.

This year's Southern Fried looks to build on last year's eclectic line-up with another brace of big names and festival favourites, drawn from the deep well of US and UK country, blues and Americana performers, utilising various Perth venues. Add in oodles of waist-expanding nosh and booze and you're on your way to a cracking weekend.

The festival runs from Friday 22nd July to the 24th and the opening concert is a pretty special one - The Blind Boys of Alabama and Iris Dement on the same billing! The Blind Boys fuse the roots of gospel, soul and the blues to create a neck-hair nibbling sound that is truly unique. They will be preceded by festival opener and support Iris Dement, in what is an incredibly rare solo appearance in the UK. Tickets are Â£21 - the gig takes place in Perth's Concert Hall.

The late night slot on Friday comes courtesy of Steve Earle's highly-talented son, Justin Townes Earle, who is continuing to forge a musical path forward, mixing roots and plaintive rock balladry in equal measure, without the mawkishness of some of his contemporaries. Tickets are Â£16.50. Abigail Washburn, who has recently recorded with Bill Frisell and My Morning Jacket persons, takes the party into the night, straight afterwards.

And talking of Iris, she returns the following day for a full headlining matinee set in the Perth Theatre with tickets costing Â£16.50. Expect tracks from across her career including "My Life" and "The Way I Should", as well as a special guest! In the evening at the Concert hall, Lyle Lovett will appear with his own acoustic group to perform songs from any one of his fourteen albums - he's a lean, keen storytelling machine and tickets to his show weigh in at Â£30.

Later on Saturday night, the man from The Mavericks, Raul Malo, will bring a mixture of country, salsa, rock 'n' roll in a Grammy-winning style all his own. A fine voice and a big personality, his show will feed into a full-on Cajun hoedown afterwards - tickets cost Â£16.50.

Finally (for now at least) on Sunday, the soul super-group STAX! Featuring Mr Knock-On-Wood himself, Eddie Floyd, plus Steve Cropper (guitarist to the soul stars including Otis Redding etc) will perform classic tracks from the huge canon of the great label of the same name. They will be very ably supported by the sensational Phantom Limb - country soul with aplomb, trust me.

All individual show tickets will go on sale tomorrow morning (Friday) at 10am.

You can also pick up a Â£75 festival pass (which includes a few of the shows above) by calling 01738 621031 - they are not available online and are very limited.