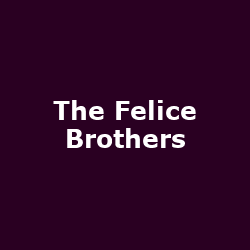 Ooh it's Friday the 13th - avoid the cracks in the pavements and steer clear of walking under ladders if you must, but don't forget to check out the brand new on-sales on the day! This week, writer and comedian Dave Gorman has unveiled an extensive tour for his Powerpoint Presentation, New Zealand's young starlet Brooke Fraser, perennial favourite Cliff Richard and grizzly rockers Motorhead are just a few acts flogging their all-action wares. Next week, you can start gearing up for George Michael tickets - they go on sale on Monday 16th May (see below for more details!).

This is a much-anticipated return to the live circuit and hopefully the beginning of a trouble-free era in the singer's chequered career thus far. First stop for the Symphonica (orchestral) Tour is the Royal Albert Hall in London for 4 nights from 25th to 29th October, followed by stops in Dublin, London again (the Royal Opera House, curiously), before heading to Cardiff (26th Nov), followed by Newcastle, Glasgow, Birmingham and Manchester. On sale on 20th May from 10am.

Prolific is flame-haired Tori's middle name - her 7th album in 11 years ("Night Of The Hunters") hits the shelves / servers in the autumn, a little while before these huge November tour dates. Starting off in the modest surroundings of the Royal Albert Hall on the 2nd, is typical of Amos, before nipping off to other grand venues in Manchester, Glasgow, Belfast and Dublin. Tickets start at £29.50 - the latter pairing went on sale this morning.

Renowned for his effective use of PowerPoint in his live shows, Dave Gorman is touring his new stand-up show - Dave Gorman's PowerPoint Presentation - with 40-odd dates in October and November. The first of seven warm-ups start in Norwich on September 27th (all £15 each), The tour 'proper' begins the next night at the Portsmouth Guildhall. The subsequent 40-or-so dates take in the length and breadth of the UK, with a Dublin date on 5th November. The dates end with a Northern Ireland show in Belfast on 30th November - prices typically being £20 (tickets for most dates went on sale this morning).

It looks as though their new album "Smother" could provide Wild Beasts with a few more beer tokens at least. Meanwhile, November is a long way off after the album's release date this week, but you'll have to be very quick to get tickets for the seven (so far) shows lined up from Oxford (11th) to Brighton (26th), with prices starting at £13.

Having literally just finished their last tour (OK, about 5 months ago), Lemmy and crew have announced their annual jaunt around the UK in the autumn, calling at Wolverhampton (2nd Nov), Newcastle (3rd) and loads more including Hammersmith and Plymouth until Manchester rounds it off on the 18th. Tickets range from £26 to £32.50.

Still looking as a fresh as a daisy (well, one that's been by a busy roadside - he is 70, gawd bless 'im) is national treasure, Cliff Richard, who has announced a new tour for October. Billed as the (cringe) 'Soulicious' tour, this clutch of dates might suggest a visit to the vaults of Motown, Stax and Atlantic - and you'd be right. Soul luminaries such as The Stylistics, Billy Paul and The Temptations will appear with him! Manchester, London's O2 and Newcastle are the confirmed trio of concerts with prices starting from £60.

Those of you regular Allgigs viewers, will have already spied our streaming link of this alt-country outfit's latest album in this week's article about The Felice Brothers. It may persuade you to grab tickets for their December tour, which is set to call at London, Manchester, Glasgow and Birmingham. Oh yes, they've just added Dublin to proceedings as well! Tickets are from £14.50.

She has already made quite an impression in her native New Zealand and now it's our turn. The first of five dates will be in Brighton 4th October, followed by London (Shepherd's Bush), Birmingham and Manchester, before ending in Glasgow on Tuesday 11th October. Prices start from £15.

It's a bit of pre-festival warm-up action for Scotland's bright young garage-pop things, The Vaccines as they head to Edinburgh for a gig and reassuring cuddle with their fans at the Picture House on 24th August. I doubt they need a confidence boost - they are appearing in Hyde Park at the Arcade Fire show on 30th June. Meanwhile this little beauty will set you back just £12.50 - watch 'em fly out!

Wearer of the occasional natty Stetson and armed with a number 1 country album in the US, Keith returns to the UK during the autumn with just one confirmed date so far - Manchester's Apollo will be the first slot on 31st October with more announcements expected in the coming weeks. Tickets for this one cost £35.

After getting Busted and being a Fightstar, Mr Simpson is off on a solo journey with a Young Pilgrim. That's the title of his new album, from which recent single "Down Down Down" was taken. It didn't exactly set the chart-world alight, but tours are where the money is, hence this one which kicks off in Newcastle on 30th June, followed by Birmingham, Manchester, Portsmouth and Bristol. Tickets are just £10.

Whatever you want, Quo will play it. Naff gag aside, a Status Quo tour is always a deadly serious business for their huge legion of fans and December's festive jaunt, with support for 'Quofest 2011' from Kim Wilde and Roy Wood (Wizzard lead beardy) will keep all ages happy. Arenas play a major part from Sheffield to Glasgow, from the 4th to 17th and tickets cost around £37.50 - all on sale Saturday, except Liverpool (Friday).

Bet you can't guess who this man is related to. Yes indeedy - he's the son of Crowded House singer-songwriter, Neil Finn, and he's got talent! These two gigs in Manchester and London are his first UK tour dates of note and should attract some attention, if only for keeping it in the family way. Tickets for the pair on 19th and 20th July cost £11.50 - £13.50.

Normally you would expect Metronomy to play a few mid-sized venues and the odd festival, during the year. Cop this little coup: they're going to round-off their autumn UK tour with a night at the Royal Albert Hall!! This is surely their biggest concert ever and could be the springboard to bigger things - and the tickets are just £17!! Remaining tour dates are £11.

In addition to his upcoming two-night residency at Cadogan Hall, comedian and writer David Sedaris has announced a longer string of shows for this year's Edinburgh Festival Fringe. He will perform five nights at the renowned Venue 150 from 16th to 20th August with tickets set to go on sale at 1pm on Friday, priced at £15.

She may be 'pint-sized' but the '80s heroine can still belt out the hits ("Thunder In The Mountains", "IEYA", "I Want To Be Free" and the ubiquitous "It's A Mystery") with a trademark yelp at every turn. Her Islington Academy date on 5th November is part of her 30th anniversary celebrations and rounds of a tour during the autumn. Tickets cost up to £20 for all dates.

Also on sale this week are dates for rock bands Young Legionnaire and Summerlin (both with a handful of UK dates, including London gigs for under a tenner), a full tour for the surreal and bizarre theatre company, The Pajama Men (mostly in December), a Bedford stand-up slot for Ed Byrne (23rd November) and the rescheduled Shakedown Festival in Brighton (now moved to September).