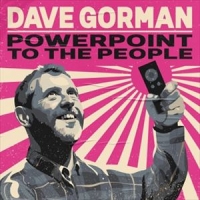 Dave Gorman has never been one of those don't-you-just-hate-it-when- observational comedians, preferring instead to centre his shows on a stated mission of one kind or another and taking audiences along for the ride.

Following a successful early career as a writer, including credits for The Fast Show and Mrs Merton, Staffordshire-born Gorman debuted at the 1998 Edinburgh Festival Fringe with his 'Reasons to be Cheerful' show. The show was effectively an autopsy of Ian Dury's 1979 hit single of (more or less) the same name, examining whether the reasons listed were in fact reasons to be cheerful. Audiences loved it and a tour followed.

Gorman's next two projects were Dave Gorman's Better World and, most notably, Are You Dave Gorman? The latter - supposedly conceived following a bet with friend and writer Danny Wallace - spawned a book and ultimately a BBC TV show and endless publicity appearances where Gorman was required to enthusiastically explain the premise once more.

Things really took off for Dave Gorman. He toured over 1,500 miles on a bicycle performing nightly gigs at often obscure locations, and then wrote about it. He visited the US for the America Unchained project - his attempt the traverse the great nation using goods and services procured only from independent outlets (gasoline was an issue).

Renowned for his effective use of PowerPoint in his live shows, Dave Gorman is touring his new stand-up show - Dave Gorman's PowerPoint Presentation - with 40-odd dates in October and November.

The first of seven warm-ups start in Norwich on September 27th, with the final pre-tour gig at his hometown Stafford's Playhouse Theatre on 3rd October.

The tour 'proper' begins the next night at the Portsmouth Guildhall. The subsequent 40-or-so dates take in the length and breadth of the UK, with a Dublin date on 5th November. The dates end with a Northern Ireland show in Belfast on 30th November.

Tickets go on sale at 9AM on Thursday 12th May, typically starting at Â£20.